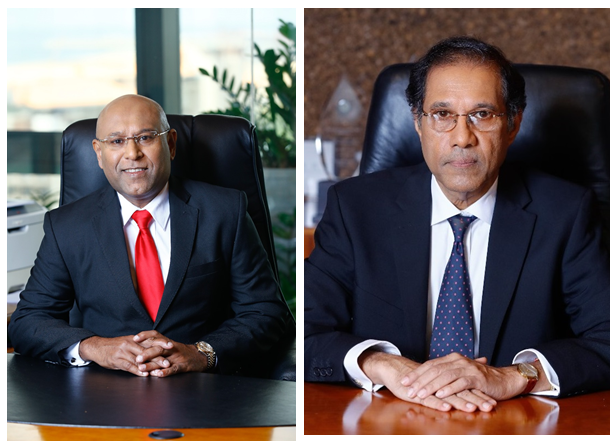 National Development Bank PLC concluded the financial year 2018 on a high note, with exceptional results reported on all fronts. Financial performance for the year reached a new high in the Bank’s history with impressive profitability and strong balance sheet growth. Increase in business volumes as well as enhanced operational efficiencies led to these sound results.

The year also marked the Bank and its Group companies being externally endorsed by a large number of local and international awards. The pinnacle of these awards were the two much coveted global awards, namely,  the Bank of the Year as adjudged by The Banker Magazine UK and the Best Bank of Sri Lanka by the Global Finance Magazine of USA for 2018, a rare feat achieved by a local bank.

Reflecting on the year passed, the Group Chief Executive Officer of NDB – Mr. Dimantha Seneviratne stated that the performance of NDB in 2018 is affirmation of the Bank’s transition from a mid-sized player to a bank of a higher league, with greater capacity, firmer resolve and power to perform. He placed on record, the unity, passion and talents of the NDB Team, which has made a successful year possible for the Bank. Mr. Seneviratne also added that, the Bank has raised the bar yet higher for 2019 and beyond, in pursuit of success and delivery of value to stakeholders and to make an impactful contribution to the country’s economic growth.

The financial statements of the Bank and the Group have been prepared based on the new accounting policies and methods which have been revised in line with the requirements of the SLFRS 9 -Financial Instruments. The Bank complied with LKAS -39, Financial Instruments: Recognition and measurements up to 31 December 2017, in the preparation of its annual financial statements. In order to recognize the impact on the transition, the Bank has adopted the modified retrospective approach in line with paragraph 7.2.14 - Transition of SLFRS 9-Financial Instruments. Accordingly the impact on the adoption of SLFRS 9 on the financial performance as at 31 December 2017, has been reflected in the opening equity balance as at 01 January 2018. The transition impact is arising predominantly due to impairment charges of loans and other losses.

The Bank reported a net interest income [NII] of LKR 14.8 bn during the year, an impressive 38% growth compared to the prior year. This is a considerable growth in the core, fund based revenue segment of the Bank, achieved amidst a highly competitive interest rate environment which prevailed during the year. Enhanced business volumes and an improved Net Interest Margin [NIM] propelled this NII growth. The NIM improved up to 3.46% in 2018, from 3.0% in 2017.

Net fee and commission income was LKR 3.1 bn, up by 24% over the prior year, and supported the overall revenue growth and strengthened the diversification of the revenue base to non-funded activities. Net gains from trading grew by 15% to reach LKR 1.2 bn.

The resulting total operating income for the year was LKR 21.6 bn, a 33% growth compared to the previous year.

Impairment charges for loans and other losses of the Bank increased by 163% to LKR 3.3 bn, within which, individual impairment on loans and receivables was LKR 2.6 bn and collective impairment was LKR 768 mn.  The impairment charges for loans and other losses are a result of the precautionary provisions made by the Bank for selective individually significant facilities, on a prudent basis, given the challenging economic environment, based on a futuristic model, in comparison to the incurred loss model adopted in the previous years.

Operating expenses saw an increase of 16% to LKR 8.5 bn, the highest component being personnel expenses, which amounted to 53% of total costs. This was mainly driven by the increase in talent recruitment to support growing business and changes to staff remuneration. Other expense categories increased only marginally, benefitting from a wide range of efficiency enhancing initiatives which were implemented during 2018 as well as the latter part of 2017. Furthermore, the Bank was able to convert more than 50% of its transactions to be routed via digitally enabled modes, thereby achieving considerable cost savings and efficiencies.

These enhancements in efficiencies and the results of sound cost management strategies are well reflected in the cost to income ratio [CIR] which improved from 45.5% for 2017 to 39.4% in 2018.

As a result, NDB recorded the highest level of profitability in its 40 years of history, from its ordinary course of business. This is affirmed with a 44% increase in core banking profit to LKR 9.1 bn. Operating profit before taxes on financial services increased by 29% to LKR 9.8 bn. Profit after taxes, including the newly introduced Debt Repayment Levy, was LKR 5.7 bn - an impressive increase of 30% over the prior year. Profit attributable to shareholders, which includes profits from subsidiary companies crossed LKR 5 bn for the first time, to reach LKR 5.3 bn, positioning the NDB Group in a new league compared to its peers.

The growth in the asset base was mainly due to an equally impressive growth in the loans and advances to customers. Gross Loans stood at LKR 353 bn as of the year end, a 27% growth and a quantum growth of LKR 75 bn. This compares well with a quantum loan growth of LKR 45 bn recorded in 2017. This expansion in the loan book is commendable, given the many internal as well as external challenges which affected the economy during the year.

Customer deposits grew by 27% in 2018 to reach LKR 348 bn. This growth translates to a quantum increase in deposits of LKR 74 bn. Accordingly, the Bank has effectively financed its incremental loan growth with incremental deposits during the year. The CASA ratio of the Bank was well maintained at 22% at the end of the year, amidst an overall decline in the CASA ratio across the industry.  The incremental growth in CASA deposits was LKR 18 bn. The resulting loans to deposits ratio of the Bank was 101.7% as of end 2018.

The non-performing loan ratio [NPL] denoting the quality of the loan portfolio increased to 2.85% from 1.83% in 2017. This increase in the NPL ratio reflects an industrywide trend, however well below the industry average of 3.4% in 2018. The Bank’s prudent risk management practices in credit assessments, proactive and focused monitoring of the portfolios and regionally driven remedial management have been instrumental in preserving the asset quality and minimizing potential loan losses.

Business expansion during 2018 was also supported by significant investments in digital and physical infrastructure for an enhanced customer experience. During 2018, NDB installed 27 Cash Recycle Machines and extended their “branchless banking services” – Bank2U across 71 branches as a part of the digital financial services strategy. In light of the deployment of digital banking avenues, the expansion of the physical branches was moderated to one new branch opened at Katugasthota, whilst 5 branches were relocated for better customer experience. Services to high net worth customers was further upgraded by opening three Privilege Banking Centres at strategic locations.

The steady growth in business and prospects of becoming a domestic systemically important bank [D-SIB] coupled with industry developments such as BASEL III guidelines, impact of the adoption of SLFRS 9, capital conservation buffer, Debt Repayment Levy, etc., require additional capital for the Bank. In response to this demand for additional capital, the Bank concluded a Rights Issue during the last quarter of 2018, resulting in LKR 3.4 bn being raised as Tier I capital. Furthermore, in December 2018 the Bank also announced its plans to raise Tier II capital via a five year listed debenture issue, to support the business growth.

A year of strategic alignment and recognition

The Transformation 2020 strategy of NDB which was launched in 2017 entered a fresh phase in 2018. The strategic blue-print was expanded to encompass a wider range of processes for efficiency enhancement, implementation of a new women-centric market proposition with a dedicated product portfolio and alignment of the Group companies to the overall strategy, with a bid to enhance synergies across the Group.

All these strategic initiatives made considerable contribution in improving efficiencies of the Bank and the Group companies and more dividends are expected to be reaped in the coming years.

During the year, NDB also obtained the EDGE Certification, which is the only global certification available for gender equality at work place. EDGE stands for Economic Dividends for Gender Equality and NDB takes pride in being the first and the only corporate in Sri Lanka to have obtained this Certification, thereby join over 200 corporate across 50 countries and 23 industries.