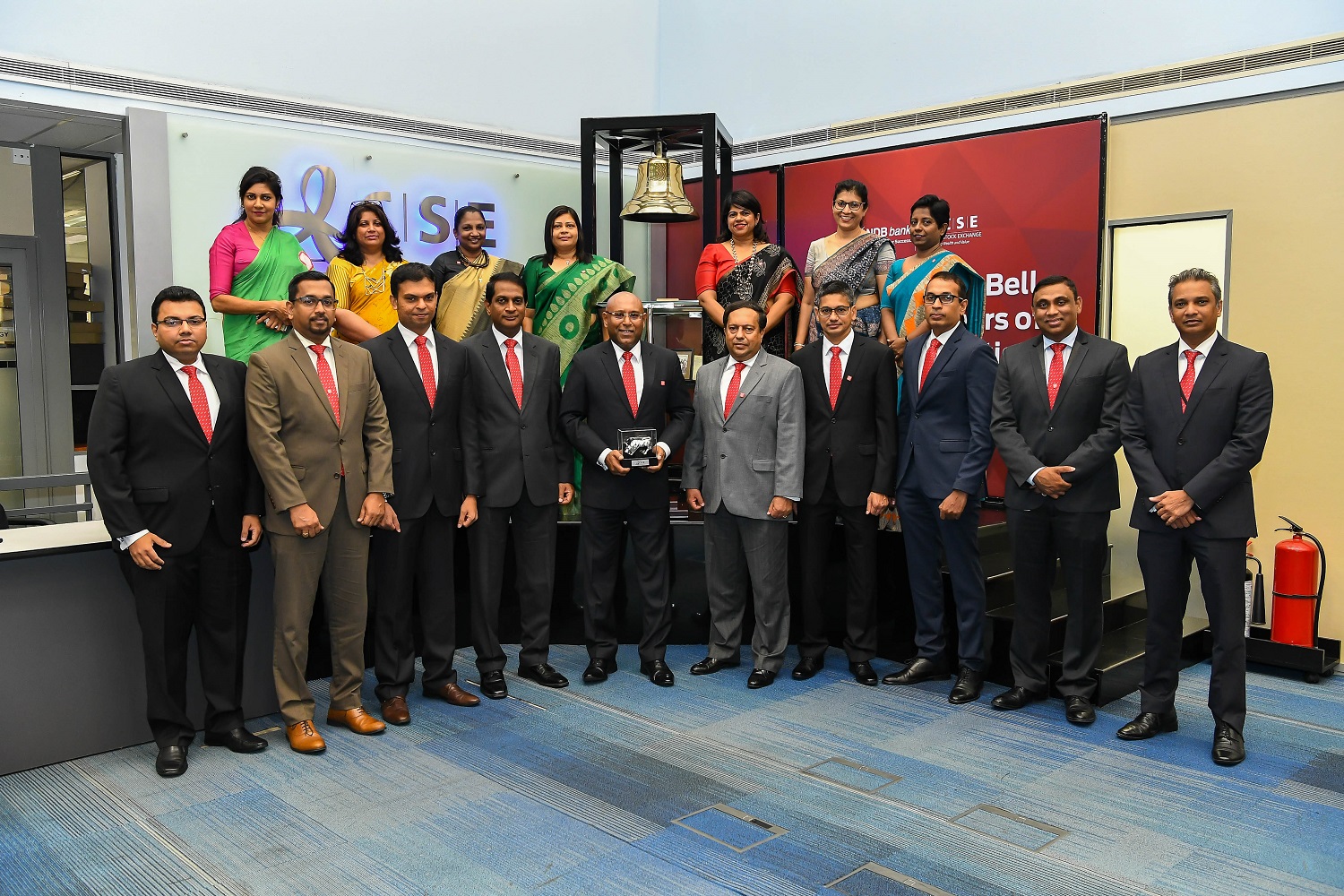 Caption : Director/Group CEO of NDB Dimantha Seneviratne, the Leadership Team of NDB and CEOs of the Group Subsidiaries of NDB.

A market opening ceremony was organized at the Colombo Stock Exchange to mark the 40th Anniversary of the National Development Bank PLC, as part of a series of events organized by the company to celebrate this significant milestone.

CSE Market Opening Ceremonies are organized as a platform for listed companies to celebrate corporate milestones and as a call to action for causes and developments that are significant to our business community, economy and society at large.

Addressing the audience during the ceremony, Director/Group CEO of NDB Dimantha Seneviratne said “The NDB share has been listed in the CSE since 1993, now for more than 25 years. It is also one of the few listed bank shares that is included in the more liquid market index S&P SL 20 since its introduction in 2012 to date.” He further added “We are proud of the many contributions the NDB has made as a listed entity, to the capital market such as securing long term local and foreign capital to the country.”

“When you consider some of the largest listed corporates in the CSE today across multiple sectors, NDB has been with them as initial financier/banking partner, propelling their growth and helping them reach up to listed entities.  In fact NDB has been an initial capital financier for two listed Commercial Banks as well. We are glad to note that even as of date, more than 60% of the 50th highest market cap entities of the CSE are banking with NDB,” he said.

NDB GCEO Seneviratne also said “The NDB Group’s capital market cluster led by NDB Capital Holdings Limited has been in the forefront upgrading our debt and equity markets.  The Group’s investment banking arm NDB Investment Bank Limited was the advisor and manager to Sri Lanka’s largest IPO to-date in 2005, as well as 3 out of the 4 next largest IPOs. NDBIB is also the market leader in debt markets, the largest manager in debt issuances and is the pioneer in introducing structured debt to Sri Lankan markets.

The wealth management arm, NDB Wealth Management Limited is the largest private unit trust manager in Sir Lanka and has over LKR 100 Bn of assets under management.  NDB Wealth is instrumental in taking investments in unit trust to retail customers, with a marked growth in their retail portfolio. NDB Securities Pvt Limited has been a member of the Colombo Stock Exchange since its inception in 1992, and an active participant with very good governance framework and research capabilities, whilst NDB Zephyr Partners Limited is committed to augmenting private equity investments in Sri Lanka.”

Meanwhile, CSE CEO Mr. Rajeeva Bandaranaike speaking at the event congratulated NDB for celebrating its 40th Anniversary and commended the progress made by the Bank since its inception. He noted that the Bank has added to the value proposition of the stock market since listing in 1993 as one of the first state-owned enterprises to list on the exchange. “The Investment banking arm of the NDB has also assisted a number of companies to list on the exchange, which has played an important role in growing the capital market over the years. We wish the Bank success in its future endeavors.” Mr. Bandaranaike added.

NDB operates around the island with a significant digital footprint and a network of over 150 ATM/CRMs and Bank2U (Branchless Banking) offerings made available at over 70 locations where Bank representatives will meet the customer for the customer’s convenience and ease. The Bank has fully embraced the digital future with 70% of its transactions now occurring via digital channels.

Meanwhile, the Bank has empowered its customers by offering a host of digital tools such as mobile and online banking in addition to the Bank’s first Phygital Branch: NEOS which made NDB the first Bank in Sri Lanka to introduce a fully paperless banking branch.

NDB as a Bank that holds three decades of excellence and experience in financially empowering Sri Lanka continues to take longer strides to reach out and strengthen our Sri Lankan Women. NDB Bank, which is the first and to date the only corporate in Sri Lanka to officially be certified with EDGE Certification is a premier retail Bank with over 111 branches across the island, serving millions of Sri Lankans through a host of financial services. From its inception, the NDB Group which includes NDB Bank, NDB Capital, NDB Investment Banking, NDB Wealth, and NDB Securities has been a catalyst in the development of the nation, strengthening and empowering entrepreneurs, corporates and individuals from all strata of the economy. Customers across all group companies have benefited from the product and service offerings of the NDB Group.