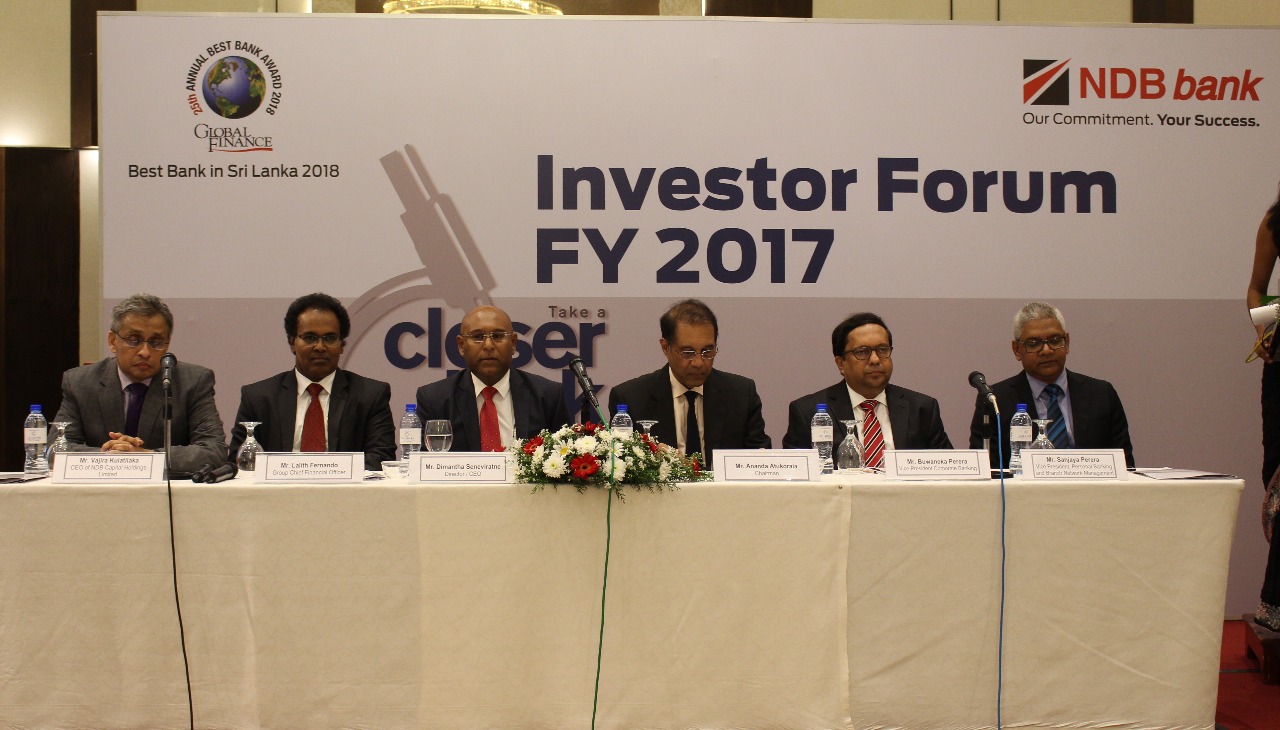 The Investor Forum marked the release of the Bank’s 2017 NDB Annual Report “Take a Closer Look”, to the Colombo Stock Exchange in early March (5th). Furthermore, the Forum also marks the Bank’s endeavours in facilitating discussions and access to management for the stock broking and investment fraternity

The key performance highlights of the year were also shared at the Forum. The Bank PAT was a significant LKR 4.35 billion an increase of 37% over 2016, while the group profit attributable to shareholders is LKR 3.49 billion, an increase of LKR 30% over 2016.

Furthermore, the Bank saw a total assets growth of 15% up to LKR 383 billion, including loans and receivables growth of 20%, to LKR 274 billion and a quantum growth of LKR 46 billion which resulted in a growth rate ahead of industry loan growth. The Customer deposits growth of 34% to LKR 273 billion was seen, a quantum increase of LKR 70 billion.

The forum was well attended by a gathering of Stock brokers, investment and research analysts, fund managers, institutional investors and financial press as well as the senior management of the Bank and the NDB capital markets cluster companies. NDB conducts transparent and consistent investor relations throughout the year. The Bank’s investor relations have been recognized locally at the CFA Sri Lanka capital market awards with the gold award for best investor relations for two consecutive years. Internationally, the Global Banking & Finance Magazine of UK has recognized NDB as the best Investor Relations Bank – Sri Lanka 2017.

NDB remains dedicated in bringing its customers one step closer to accomplishing their life long ambitions and uplifting their standards of living through the range of financial services that is accessible through its growing branch network. Further details on NDB’s many products can be obtained from its 24 hour Call Centre, by calling 011 244 8888 or by visiting NDB Bank’s website on www.ndbbank.com.