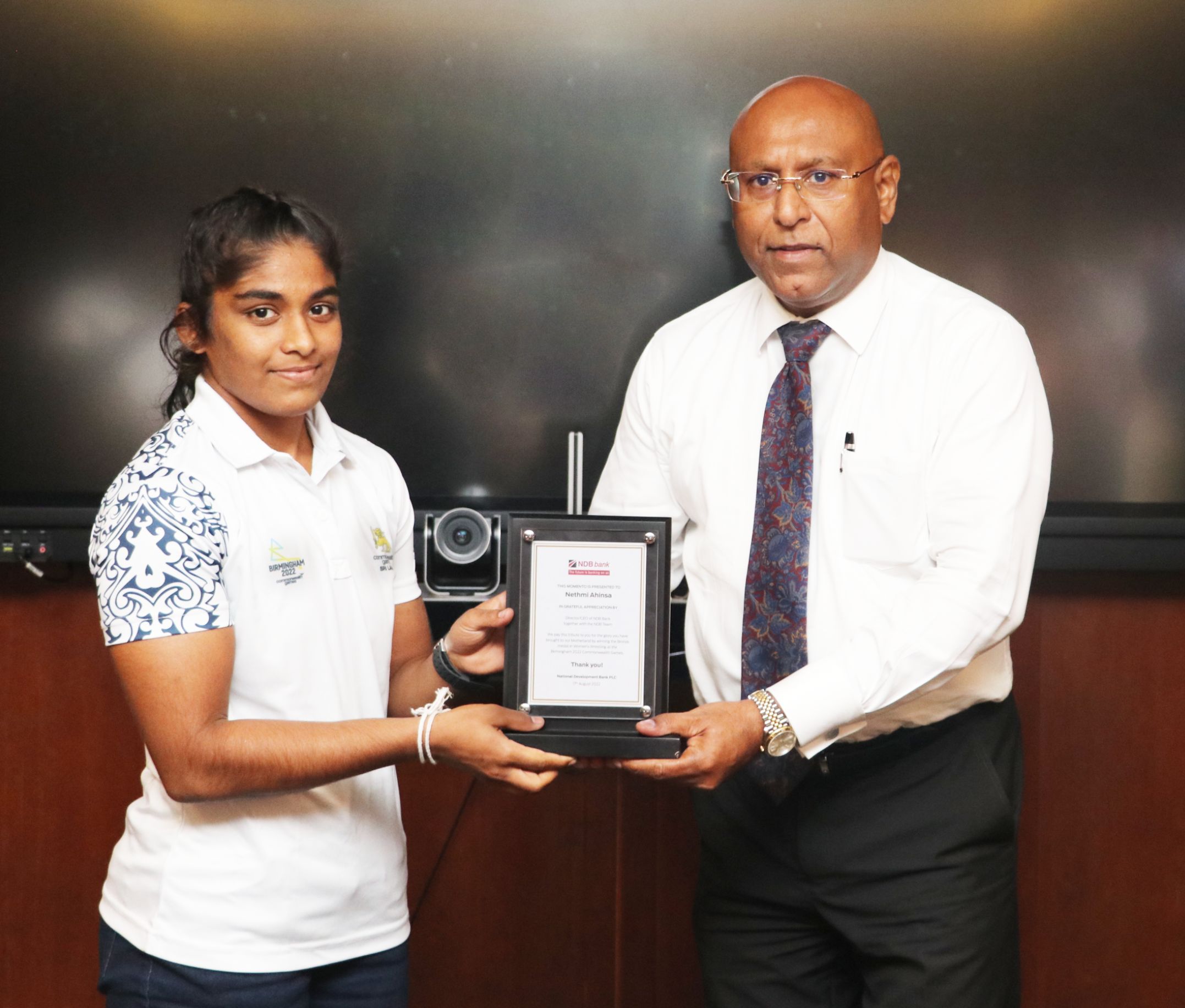 NDB Bank, as part of its efforts to support the development of sports amongst future generations, recently felicitated 18 year old Commonwealth Bronze medalist Nethmi Ahinsa for bringing prestige to Sri Lanka at such a young age.

The young medalist was recognized together with her coach at the NDB Bank Headquarters by the Bank’s senior management.

“Sport is the one thing that can bring communities and even the country together, as was made obvious by the great interest shown towards the Commonwealth Games, and the pride and joy shown by Sri Lankans in the achievements of our young athletes. Thus, as a Bank that has its roots in the local community we too are committed to extend our support to young athletes such as Nethmi who have worked so hard to achieve greatness for the country and themselves, and to motivate and encourage them to work harder for the future glory of Sri Lankan sports,” NDB CEO Dimantha Seneviratne said.

The Bank also appreciated Nethmi’s coach Suranga Kumara for his unwavering commitment towards Nethmi’s win and for being a pillar of strength in bringing her to this level.

Eighteen-year-old Nethmi Ahinsa became Sri Lanka’s youngest medalist at the Commonwealth Games as she beat Irene Symeonidis from Australia in the 57kg weight class. She won a bronze medal in wrestling in Birmingham.

NDB Bank was recently named the Best Bank in Sri Lanka by Euromoney, making it the third major award received from the world’s most prestigious publications in financial services – Euromoney, Global Finance and The Banker. This win for NDB comes in the light of being named the “Most Awarded Corporate 2021” as per LMD ranking. The Bank was also recently named one of the “Top 50 Best Workplaces in Sri Lanka 2022” by Great Place Work, USA. NDB is the 4th largest listed bank in Sri Lanka and the parent company of the NDB Group. The only financial services group in Sri Lanka, NDB Group is uniquely positioned towards assisting the growth and development of the Sri Lankan financial market to provide its customers seamless access to the product and service offerings of all its group companies.